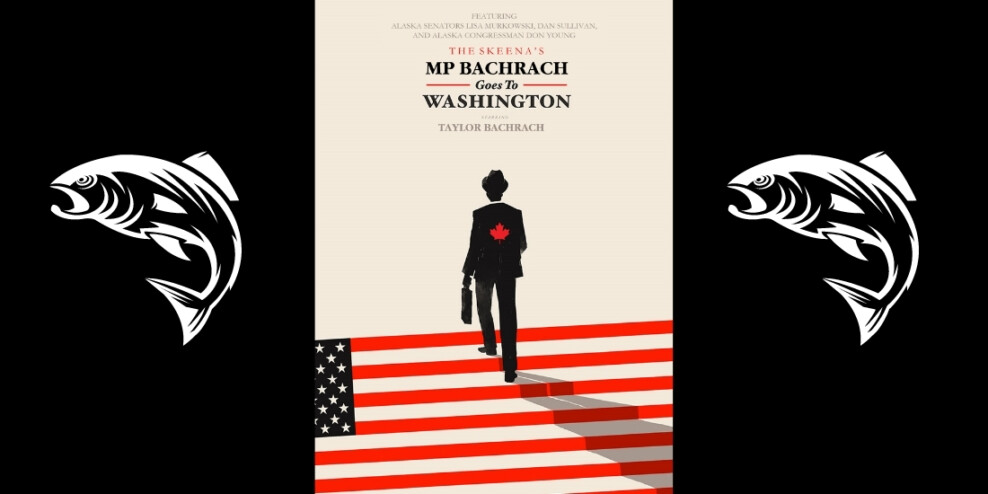 Cross-Border Salmon at Risk So MP Bachrach Goes To Washington

This article first appeared on Skeena Strong. Reprinted with their permission.

Member of Parliament for Skeena-Bulkley Valley, Taylor Bachrach was in Washington D.C. last week to speak with Alaska members of Congress about solutions to the steelhead and salmon crisis in BC.

“The urgency of this crisis requires immediate action. That’s why I’ve come to Washington to make the case directly to decision-makers in Alaska that we need to be working together more closely,” said Bachrach. “Steelhead are an iconic part of our region and contribute millions of dollars to the local economy every year. More importantly, they’re an integral to a lot of folks’ lifestyle in the Northwest.”

Bachrach met with Alaska Senators Lisa Murkowski and Dan Sullivan, as well as Representative Don Young to discuss conservation issues, Bachrach’s legislative assistant James Hammond told Skeena Strong. These issues include “Alaskan interception of Skeena steelhead and salmon, the need for increased data sharing to monitor stocks, and genetic testing to get a better sense of the stocks being fished across the border.”

“The Alaskan delegation has expressed a keen interest in the sustainability of transboundary watersheds,” Bachrach said. “Fisheries management is an important part of that conversation and I’m hopeful we can have a productive exchange.”

The trip is in response to the lowest Skeena River steelhead run ever recorded in 2021, as well as years of depressed salmon stocks across the region, crippling fishing closures, and growing concern that stocks will continue to dwindle in the coming years.

Recent research conducted by PhD candidate Michael Price out of Simon Fraser University shows that Skeena salmon populations have disappeared at an alarming rate over the past decades, losing about 70 per cent of their historical abundance in the last century.

According to Aaron Hill of the Watershed Watch Salmon Society, Nass and Skeena River salmon and steelhead are often intercepted by the Alaskan fishing fleet before they return to their spawning grounds on our side of the border. He also notes that when conservation measures are initiated in BC waters, the Alaskans rarely follow suit.

According to a press release from Bachrach’s office, “residents, stakeholders, and resource managers have expressed that better data sharing and coordination with Alaska’s fisheries managers is an important aspect of stock recovery efforts. Skeena River steelhead transit Alaskan waters as part of their migration.”

Yet still, as Alaska sport and commercial fleets continue to fill their boats on the Alaska side of the border, it remains to be seen how much they care if fish make it back home to the Canadian side.

WATCH: Orcas Come Back to the Salish Sea